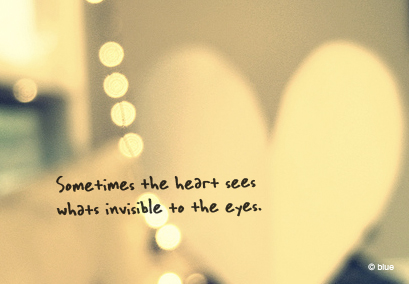 This quote is attributed to  H. Jackson Brown Jr. , Author of Life’s Little Instruction Book, but I seem to remember reading this or at least a similar sentiment somewhere else, so I set out to find where I was sure I read it.

This beautiful curiosity allowed me to listen to one of my favorite books again, and I now feel it was a meant to be curiosity.  My heart needed to see that book again.

It is only with the heart that one can see rightly; what is essential is invisible to the eye.

I actually think that there was a bit of an issue about the way this sentence was translated from the original French. I think that these quotes are translations of the same sentence.

I remember how reading that sentence made me feel.  I felt that someone had put into words what I had felt for so long.  I’d never until that point actually heard this before.  It made so much sense to me that I thought I’d discovered the secret to life!  I then ordered this translation of the book and sent it to 3 of my friends.

They didn’t really think it was the secret to life, but that was ok with me.

I have not, in years sent books I love to people I care about, well I haven’t found another book that I think I should send.  This book is very precious to me, its sentiment is even more precious now as we live in a society where superficial things are not only accepted and encouraged, but in some cases are expected and sometimes even required.

I like being reminded that the things that matter most, I most likely cannot see with my eyes. 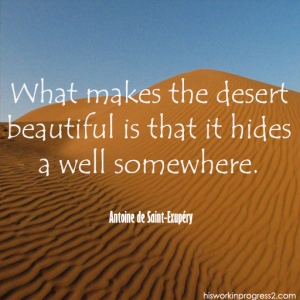 “What makes the desert beautiful is that it hides a well somewhere.”

This is another really special quote.  It is dear to my heart, but that’s another story for another post.

Perhaps this book is one of the wells I have found in this desert.

I am taking part in the Write 31 Days Challenge.

This site uses Akismet to reduce spam. Learn how your comment data is processed.

January – A Member of the Wedding

May – Before We Were Yours

June – The Mother of Black Hollywood

November – The Chronicles of Narnia